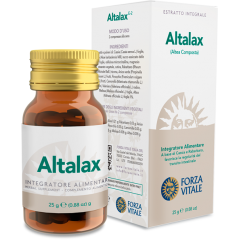 Sen is the main component of this supplement and famous for its laxative properties. It is in fact able to stimulate the lazy intestines, thanks to its components, anthracenic derivatives such as a series of anthraquinones combined in the form of glycosides, which innocuously irritate the intestinal mucosa, facilitating the stimulation of evacuation. Another component present is Aloe, also recommended in case of constipation. Indeed, its active principles, Aloin A and B, 5 hydroxyloin and aloinosides A and B, will be absorbed by the colon and hydrolyzed through the bacterial flora present, until active metabolites are obtained, of which the main one is aloe-hemodia -9-antron. These then accelerate the transit of the fecal mass in the colon of the intestine. In addition, through a biochemical mechanism that involves the enzyme Na + K + -adenosine-triphosphatase, which acts on the opening and closing of chlorine channels, they increase the water retention capacity in the large intestine, keeping it soft and mobile. fecal mass. Rhubarb also represents an important component of the complement. Indeed, thanks to its active metabolites that are tannins, it has a strong laxative action and acts at the level of the large intestine, where it determines the inhibition of water reabsorption, causing an increase in the functionality of intestinal peristalsis. Anise seeds are often used in the treatment of enteric problems due to their carminative effects and the important role in digestive processes. Generally, they are used in cases of intestinal atony, when, especially in green anise, they have a direct action on peristalsis; at the same time, they also have a beneficial effect on painful contractions, thanks to an antispastic action, which contributes so that these seeds can also be used in the presence of dyspepsia and meteorism. Likewise, Fennel seeds are often used against dyspeptic problems, meteorism and intestinal spasms. They are especially recommended in conjunction with anthraquinone laxatives, to guarantee a complete correction of intestinal atony, ensuring immediate well-being with the disappearance of the annoying symptoms that accompany it. Chamomile represents a soft sedative, useful to reduce pain caused by intestinal spasms and eventual colic. This plant has hydrophilic compounds such as flavonoids and glycosylated coumarins and lipophilic components such as terpenes and azulenes, which are incorporated into the aforementioned activities, with a disinfectant, anti-inflammatory and soothing effect. Valerian shows an even stronger sedative effect, thanks to the presence of alkaloids and flavonoids, it is ideal for curing irritable bowel or in cases of insomnia and anxiety; it may also be involved in the cure of gastric spasms and in the presence of colitis. Melissa, on the other hand, is an officinal plant whose active principles act especially in cases of symptomatic neurotonia. Having cateretic and cholagogue action therefore helps bile secretion and regulates its consistency; By keeping the bile not very viscous, not very dense, the danger of formation of painful stones, responsible for cramps and colic, is removed. The Altea is a plant belonging to the Malvaceae family and has mainly emollient and soothing properties; Thanks to its rich composition in mucilage, it is particularly indicated to act at the intestinal level, where it manages to block and absorb any toxins that may be present.


By buying this product you can collect up to 12 loyalty points. Your cart will total 12 points that can be converted into a voucher of €0.36.